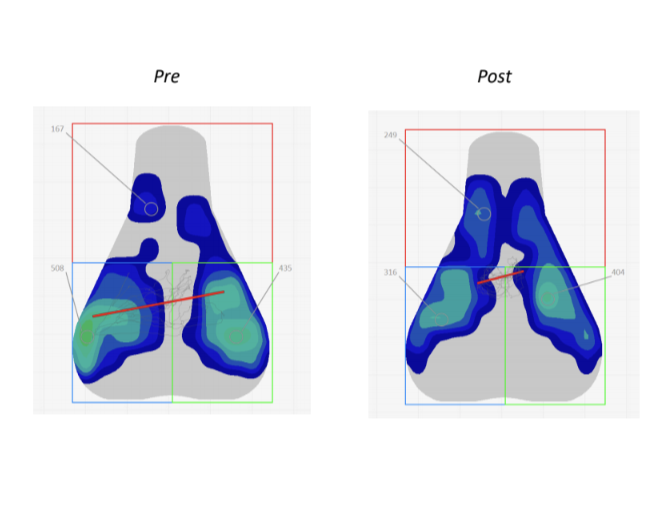 Saddle pressure mapping is great for identifying abnormal pressure locations and intensities relating to saddles.  It can also be helpful in identifying instability in a rider’s pedal stroke which can often be contributing to some pain symptom.  Instability can often be from an individual’s unique movement patterns and this interaction with a fixed feature on the bike such as Crank Length.  When making recommendations for parts I want to be able to present evidence to my client as to the need for the change.  Along with other objective measurements, visual, and auditory observations of the pedal stroke, Saddle Pressure Mapping images show evidence of improved outcomes from positioning and equipment changes.

The red line in the center of the image indicates the direction and total lateral translation during the pedal stroke. Looking at the two images one can see the Pre image has a much larger line indicating a much larger lateral translation which is not desired while riding and can lead to saddle sores as well as joint pain. We also know from the Pre-Fit Assessment this rider has some decreased mobility contributing to the excessive movement during the pedal stroke as well. The decreased rider mobility will not be corrected during the bike fit, this will take some time and a dedicated mobility routine. One variable we can control during the bike fit is crank length. The smaller red line on the right in the Post photo indicates greater stability, and a more symmetrical sitting position. The outcome was significant. Other changes were made to the overall fit to improve the riding position but the big difference was realized with the crank length change and an appropriate adjustment of the saddle height. With evidence such as this I can be confident when making part recommendations there will be a benefit to the expense.

gebioMized Saddle Pressure Mapping provides the fitter and client a way to visualize the way a rider is positioned and interacting with the saddle.  Previously, without this technology,  this type of analysis is left to visual observation from the fitter and any feedback the rider is able to give regarding their sensations.  The pressure mat is now giving us the opportunity to visualize with greater clarity the riders posture and interaction with the saddle.  This has direct influence then on the quality of a riders pedaling kinematics.

Pressure mapping provides important feedback with regard to:

Here are a few examples:

Below is a rider who was dealing with left lateral knee pain.  The red line you see on the image is the line of regression or axis of movement.  You can see from the image on the left this rider is rotated back and to the left placing strain on the IT band and lateral hamstring tendons.  Improvements were made through changes in the saddle height, for aft and a different shape saddle was selected with the same width.  A more symmetrical movement of the pelvis was achieved indicated by the more horizontal red line, and a more even positioning on the saddle.  The end result being a decreased pull and strain on the tendons on the lateral aspect of the leg.

This example below is a rider with no specific pain complaints but has sensations of an assymetrical pedal stroke and is constantly shifting around on the saddle in an attempt to find a stable point.  Modifications to the saddle position were made, stance width was modified, a wider saddle was selected and a different shape utilized.  This rider also has a leg length discrepency.  There are ways to minimize leg length differences on the bike but with SPD style pedals, the cleat/pedal interface does not tolerate using much more than 1 or 2 mm of shims before the shoe/pedal interface becomes unstable. In this case, a compromise must be made between the reach of the different legs.  You can see from the picture the rider has improved symmetry and more symmetrical contact with the saddle.  Visually this was shown by a more stable appearance on the bike with a dramatic decrease in rocking of the pelvis during the pedal cycle.

A Rider with General Discomfort

The pre fit images show a rider whose self selected position is sitting on the front end of the saddle.  The pressure mapping shows this as well as the visual image of the rider showing an excessive percentage of the saddle off the back of the hips.  With saddle position and handlebar position modifications the weight bearing position on the saddle was notably improved along with rider comfort.

ISM saddles certainly have a unique pressure mapping profile.  These saddles are often used by triathletes and road riders for their pressure relief benefits when in the low and forward position found on a time trial bike.  This rider came in with complaints of right hip pain.  You can see the pressure bias is certainly heavy on the right.  There were several biomechanical and position factors contributing to the symptoms.  These included leg length discrepency and a natural toe out posture which was addressed with cleat positioning.  The same saddle was maintained but the position modified to a more appropriate height and offset.  This combined with cleat and saddle adjustments and the rider achieved a more neutral position on the saddle and a more smooth pedal stroke. 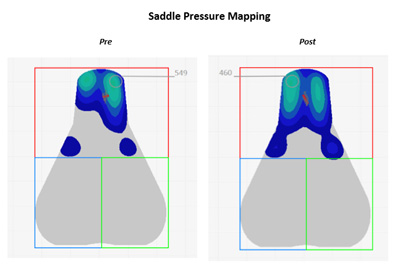 Another example illustrates how pressure mapping can provide eyes on the saddle to provide insight into where a rider is placed on the saddle.  This image on the left shows the rider shifted far forward on the saddle and rotated forward on the left side. Keeping the same saddle and modifying the position allowed this rider to sit more symmetrically on the saddle with decreased rotation of the pelvis.  These rotations and assymetries can lead to improper muscle firing patterns and recruitment contributing to different patellofemoral pain syndromes and tendonits.

Riders make appointments to get a bike fit for a variety of reasons.  Some come with pre existing injuries that are in varying degrees of rehabilitation and recovery.  Bike fitting is one part of the recovery but should not be considered a panacea.  Sometimes, as a rider recovers a follow up is required to update the position with the riders new abilities or feedback on their position.  In this case, the initial fit was done without Pressure Mapping.  The position was improved and the rider was able to return to training at a low level.  However some persistent sensations around the left knee prompted follow up appointments.  During the final follow up, Pressure Mapping was utilized and showed an asymmetrical sitting pattern and pelvis rotation on the saddle.  Pressure Mapping allows the fitter to visualize position and movement of the pelvis on the saddle in ways that could not be done without this live imaging system.  With some additional saddle position changes, the movement of the pelvis and therefore the leg became more symmetrical and the rider has resumed more normal training with ambitions of participating in his target event.  The point to take home with this example is that each rider brings varying degrees of complexity to the fit session and the constructive feedback you give to your bike fitter prior, during, and after the fit is integral in a successful outcome.

Appointments can be made for full Personalized Bike Fits or shorter Saddle Demo and selection appointments using the gebioMized pressure mapping system.

To follow up on how to consistently reproduce your saddle position time after time, I would be remiss if I did not address fore/aft position.  Saddle position, much like your handlebar position, is measured in two planes.  The X (horizontal) and Y (vertical).  Both these measures are taken from one central landmark on the bike, your bottom bracket.

Here are two way to accurately measure your fore/aft (X, horizontal) position and make documenting and reproducing your saddle position reliable and consistent.

A weighted line is a simple and reliable method to measure the fore/aft position.  Ideally you will have your bike level on a stationary trainer.  You could also lean it against a wall in the most vertical way possible but this introduces a few variables.  Your line should be long enough to drop past the chainstays and bottom bracket.

Take a ruler or tape measure and align it with the center of your bottom bracket.  Let the weighted line settle to a consistent point.  Perform a few repetitions to ensure the line is settling consistently in the same spot. 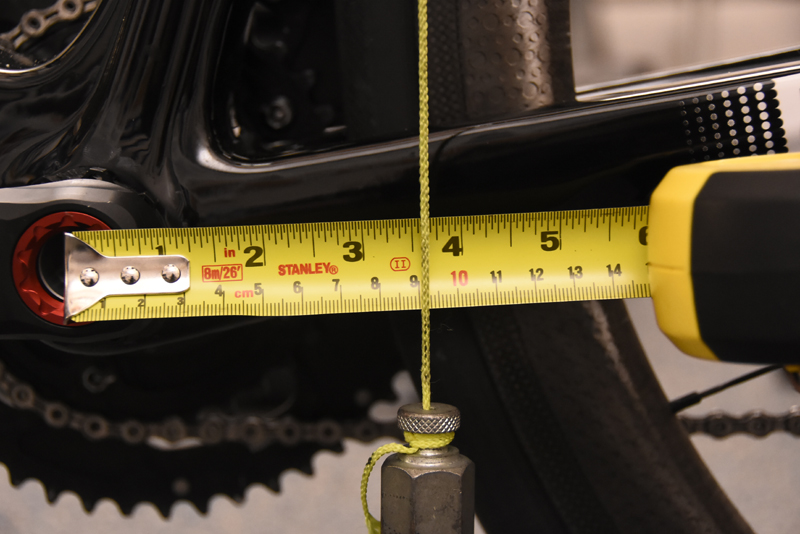 There is your fore/aft position! 9.1 cm is the example used in this post.

You are all set to get your saddle dialed in after any maintenance, changes in seatpost, and to replicate your position on a similar style bike with the same saddle.

I am frequently asked when performing bike fits how to measure the saddle height and reproduce the saddle position if the seat post is moved or taken off.  Here is a reliable way to reproduce bike saddle height or match saddle height bike to bike for a similar style bike (i.e.-road bike to road bike or cyclocross to cyclocross bike) with the same saddle.  If two saddles are different, the seat heights may not directly transfer.  Your pelvis will interact differently with each saddle brand and shape and may require some minor adjustments to your previously established position.

A few easy steps will have you confidently positioning your saddle time after time.

1.  Find the point on your saddle that is 80 mm wide and place a piece of painter’s tape there with the back edge of the tape at the point where the saddle is 80 mm wide. 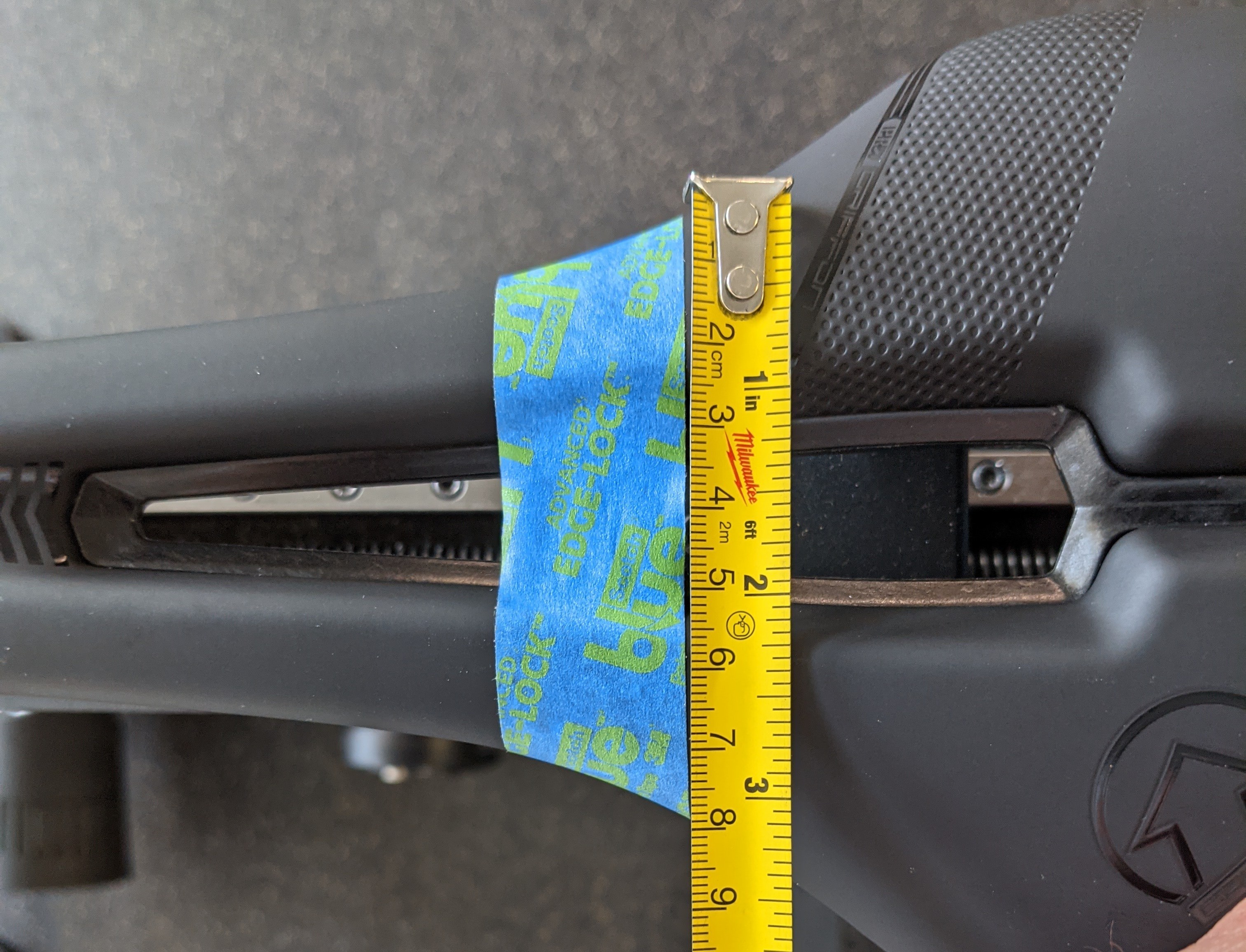 3.  Measure from the center of the bottom bracket to the back edge of the painters tape.  The non drive side is preferable but the measurement can be done on either side.  Just be consistent with the side you pick.  Some modern cranks do not have a nice central crank bolt to measure from on the drive side.

4.  You will want your saddle height to hit the back edge of the painters tape.  For this example the target number is 74 cm.

So fear not the dreaded move of your seat post and be confident in your technique to find and reproduce your established saddle position.  Once you have your saddle height dialed, you can always wrap a piece of electrical tape just above the seat collar for an easy reminder of saddle height.

Ride on and visit ptbikefitllc.com often

Welcome to the PT Bike Fit, LLC in Lancaster, Pa.  Here you will find the latest news at PT Bike Fit (Lancaster Pa), cycling news and tips, new product information, and the occasional cycling adventure story worthy of being shared. 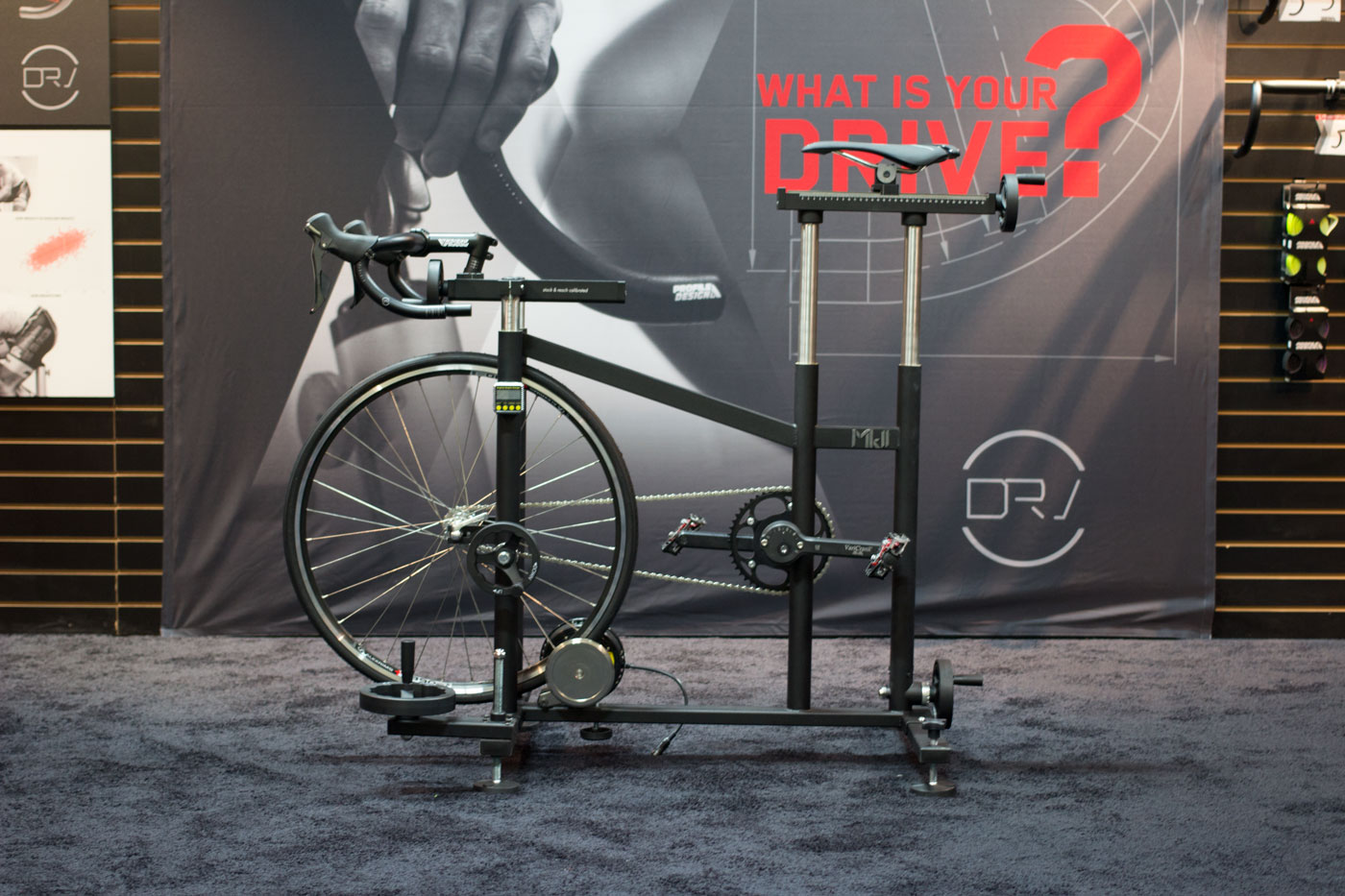